If asked to picture Christmas, you’ll probably conjure up images of presents under the tree, stockings hung by the chimney with care and huge turkey dinners you let yourself get away with because it’s the diet-free day of December 25th. Maybe you’ll think about walking through your local town or park to take in the displays, or perhaps you’ll remember the last time you decorated your own home for everyone’s favourite time of year?

Well, there’s one thing that brings all those festive thoughts together: they are images lit and made special by the enchanting illumination of Christmas lights. Whether festooning your house with an extravagant display, walking through public shows, or keeping it simple with a string of lights around the tree, they’re an integral part of the season.

Well-known displays have even become tourist destinations in their own right. Who hasn’t been to one of these? 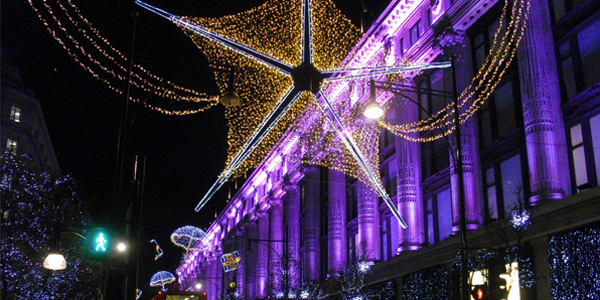 Oxford Street: Christmas 2017 will see 750,000 LED bulbs come together to cast a magical glow over one of London’s most famous and walked streets. Three miles (the longest shopping street in Europe) plays host to one of the best displays in the world. 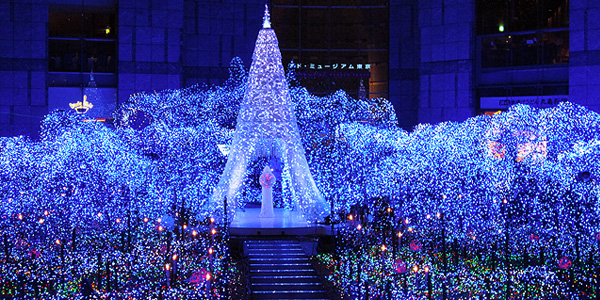 Shiodome Caretta Illumination: Japan might not seem the logical place for Christmas lights, but head to Tokyo’s Caretta Shiodome mall for a truly sensational display. With roughly 250,000 LEDs packed into such a small area, the venue puts on a breath-taking show every 20 minutes across the Christmas season. 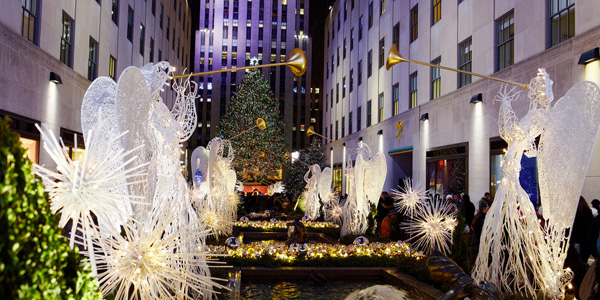 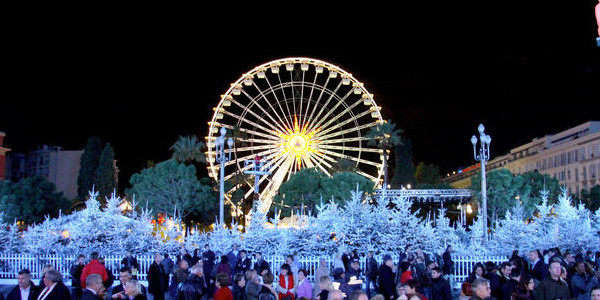 Nice Village de Noël: Head to the French Riviera for Christmas among the palm trees. The famous Promenade Des Anglais is richly decorated with fabulous lights and magnificent Christmas light installations, and the Village de Noël is the centre of the party. 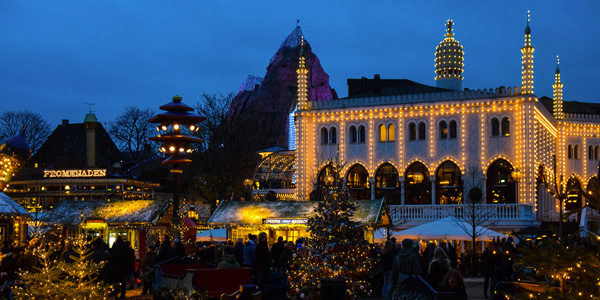 Tivoli Gardens: Set in the middle of Copenhagen, Tivoli Gardens has been a destination for the festive period ever since it opened way back in 1843. Visit today to take in an extravagant light show that beautifully illuminates Tivoli Lake. Make sure you stick around for the fireworks. 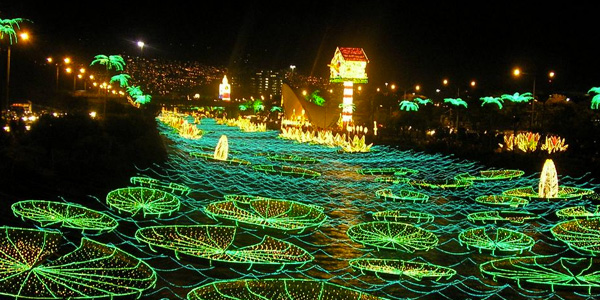 Medellin: Another lesser-known and rather unlikely entry is found in one of Colombia’s most infamous cities. Their annual festival of lights is something else entirely. Whole streets are lit up, with buildings covered instead of simply accented. For Christmas 2016, it took 27 million bulbs and 472 miles of light hoses. Oh, and 2017 is expected to be even bigger. You got this, Colombia.

So, Christmas lights are a big deal – it’s downright impossible to imagine the festive season without them. We’re about to clue you into the future of Christmas lighting: LED tape. Before we do, we thought we’d treat you to:

Ready to get going? Great – so are we! 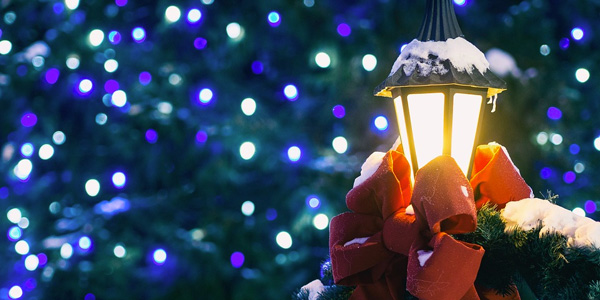 The History of Christmas Lighting

The worst struggles we face with modern Christmas lights tend to revolve around tangling. That was one issue people didn’t face in the 1600’s when Christmas lights started to take root in Southern Germany. Way back when it was candles instead of bulbs that helped bring in the Christmas season.

By the start of the 17th century, decorated trees were making an appearance across the country, and Christians would display a burning candle in their windows to indicate that other Christians were welcome to come worship. As time went by, small candles were attached to tree branches using pins or melted wax, and the early forerunner of the modern Christmas light was born.

It was ‘good Queen Charlotte’, wife of ‘Mad King George’, who brought the tradition from her native Germany to the heart of England. She sat up the first known English tree at Queen’s Lodge, Windsor, in December 1800. Candles were an expensive light source, and using them for so frivolous a festive purpose became a hallmark of upper-class homes seeking to keep up with the Joneses. Candle holders replaced melted wax, and lanterns or glass balls started to be used at the turn of the 20th century.

But it was Thomas Edison who really changed everything.

By 1880, Edison had pretty much sussed out his revolutionary incandescent light bulbs. But how to market them?

Turns out, the best way was to string incandescent bulbs all around his famous Menlo Park laboratory compound. Passing commuters would see the unexpected Christmas miracle as they passed – the remote generator was concealed a just-plain-showing-off eight miles away. Not too subtle, you might remark, but keep in mind that this is a man who once electrocuted an elephant.

So, companies went back to the drawing board. By the time the 1930s had rolled around, fears of subpar or unsafe lights were fading, and Christmas lights were affordable enough to become a middle-class staple. Demand grew, prices continued to fall, and the introduction of the minilight, which continues to dominate the market, offered high-impact, low-cost lighting.

Perhaps more importantly, the way we lived began to change. With more and more families owning a home, more and more families wanted to put their own festive stamp on it when Christmas came each year, and that’s exactly what they did. What began with candles in windows across Southern Germany matured into the breath-taking illuminations that mark modern Christmastime. 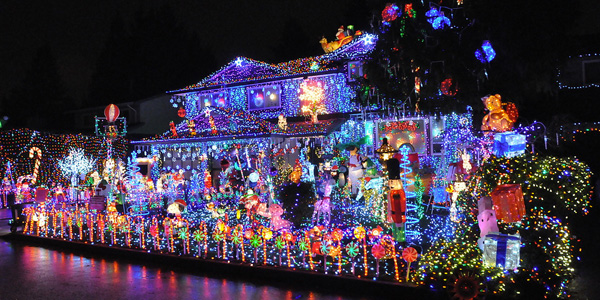 The Evolution of Christmas Lights

The concept of Christmas lights evolved from candles to modern LED strips, but what steps did they take along the way?

We’ve already discussed how Edison broke new ground with his incandescent bulb, but it was chemist Humphry Davy who first tinkered with high-voltage arc lights. High-voltage arc light – honestly, nothing about that is remotely safe. Electricity jumped between two carbon rods to emit super-bright light. Quite impressive, but very hazardous and not at all long-lasting.

Swan developed the first incandescent lights, so Edison convinced him to become a company man and then promptly developed the idea himself, gaining the rights in the process. Not exactly the Christmas spirit, but his carbon filament bulbs paved the way, so we’ll give him a pass.

The NOMA (National Outfit Manufacturer’s Association) Electric Company kicked off in 1925 and remained the largest manufacturer of Christmas lights for the next four decades. Why? They developed strings of small, coloured light bulbs that were safer and more economical than anything people had seen before. Sales soared.

Initial concept set in stone, inventors started to innovate. Scores of blinking-bulb patents emerged during the 1920s. When electricity created heat inside the bulb, the circuit was broken. As the light cooled, the circuit reconnected. The intermittent blinking still seen in Christmas light displays to this day was born. The same method is used in modern red-tipped blinker bulbs.

First invented in 1935 by Carl Otis and then improved year-on-year, the bubble light worked by heating low-boiling liquid with a hidden incandescent bulb. Modern lights use dichloromethane instead of oil, but the design remains fundamentally unchanged. Way to go, Carl.

NOMA stepped in to market tiny and easily replaceable fuses in 1951. They’re common to almost all decorative lights today, and they’re part of what makes modern lighting displays so safe and relatively dependable, especially considering the advances of smoke- and heat-detecting ornaments that followed.

Even blinking incandescent bulbs soon became a little dated, and inventors answered the call to brighten up Christmas with something fresh.

The world was treated to:

With the rise of computers came the rise of computer-controlled lighting. It’s a concept that really gained steam in the 1990s, when fully programmable lighting systems could use state of the art software and wireless technology to produce elaborate lighting displays that changed based on what music was pumped through the sound system. 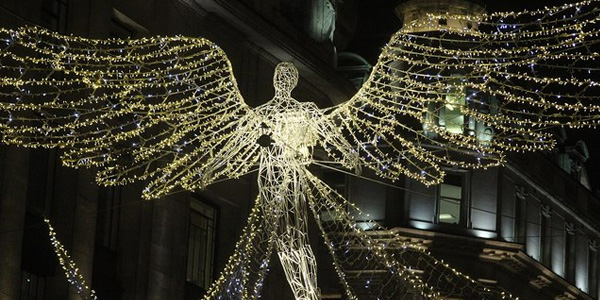 The easiest way to begin is by looking at bulb types.

And we always have those more interesting Christmas lights for people looking to make more of a statement. Popular options include: 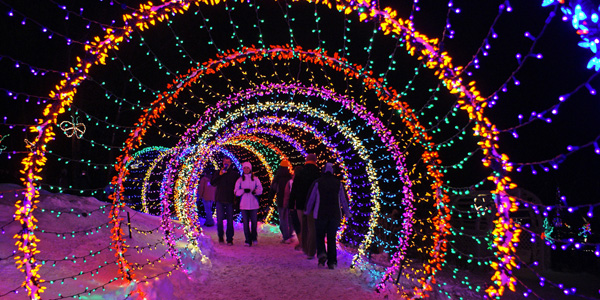 The Future of Christmas Lighting

Yep, Christmas lighting has sure taken some strides, and long ones at that. And it’s an industry that never stands still. With such demand each year, manufacturers are always ready and willing to adopt the latest technology, and the future of Christmas lighting seems to be LED tape.

Good questions all, so let’s get started to get you up to speed.

What is LED Tape?

Well,  LED tape is pretty easy to understand. It’s essentially a very flexible circuit board, but it looks just like a normal length of tape. What you’ll notice is the surface mounted light-emitting diodes (SMD LEDs) that run along the surface of that tape. When you connect them up to a power source, you’re provided with a long length of lit tape. There’s usually some kind of adhesive backing to help fix your LED tape where it needs to go, and it can go almost anywhere.

LED tape isn’t particularly new; in fact, it has been used for years for projects as diverse as modern art installations and simple kitchen or bathroom accent lighting. But now it’s set to conquer Christmas.

LED tape might be new to the Christmas light market, but there’s already a smorgasbord of different types, with options covering everything from colour warmth to LED chip number.

Let’s start with chip number. You’re basically going to find two chip types on the LED tape market: the 3528 and the 5050. Each comes with its own power requirements and output brightness, and the best choice depends on what you need your LED tape for.

To find out more check out this helpful post of LED Chips to find out which one you should choose.

And chip type is really just the tip of the iceberg. Further considerations include:

You can run AC LED tapes straight from the socket, only having to plug them in to have them ready to go, or you can choose DC LED tapes for a waterproof silicone covering and the convenience of adhesive backing. Looking for lumens aplenty? High power LED tape is also available, although it’s often a little more rigid than your typical tape, so take that into account before you buy. 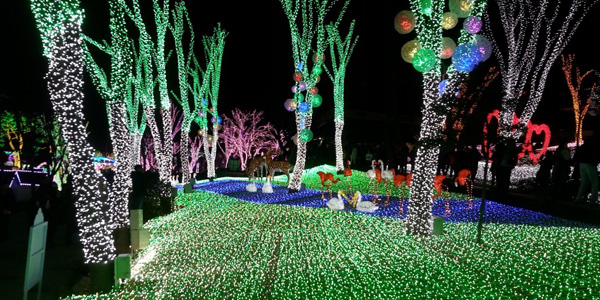 Why is LED Tape the Future?

Maybe you’re a little flummoxed by the number of factors you can consider when it comes to LED tape. Truth be told, it isn’t nearly as complicated as it seems – all you’ll normally need do is navigate to the right section of a website or area of a shop, and there’s a compelling range of benefits to adopting LED tape for Christmas 2017 and beyond.

We could go on. Suffice to say, LED tape is the cat’s pyjamas. You get flexibility, eco-friendliness, versatility, safety, and long service life all in one single package – let’s just say LED tape has firmly earned its place on Santa’s nice list.